This portion of the Sharp Farm features a number of alien plant species. This means they do not occur here naturally, or are non-native to this environment. In many cases, these alien species are also considered invasive because they are aggressive growers and can out-compete and displace native plants.  Displacement of native plants can disrupt the natural life cycle of important plants, animals, and decomposers.  Alien plants can be very difficult to manage or control.

For example, the woodland edge contains an invasive alien vine called Sweet Autumn Clematis (originally from Japan and introduced as an ornamental plant for gardens, which escaped from cultivation and quickly spread throughout the U.S.). It is a fast-growing vine that forms dense mats that smother and kill shrubs and trees.  It also completes with native vines for essential resources. Controlling the spread of this plant requires strategic and persistent cutting, pulling, and herbicide spray. 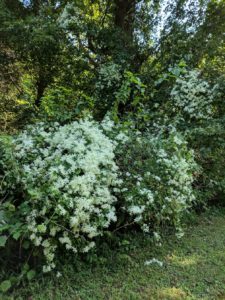 Below is a list of some of the common native and alien plants growing on the Sharp Farm: