In the early 1900s, Wild Turkeys had disappeared from Delaware. They suffered from habitat loss via deforestation and eventually the turkey population was hunted to extinction. In 1984, wildlife biologists began re-introducing turkeys from nearby states – Pennsylvania, New Jersey, and New York. Ultimately, 167 turkeys were trapped and relocated to Delaware. These efforts were hugely successful and after only 7 years, Delaware was able to offer a limited hunting season. Delawareans can harvest one turkey a year during April and May, when male turkeys are courting females. 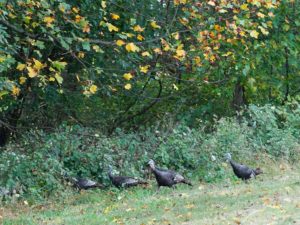