What ecosystems do you see?

What ecosystems do you see?

There are a variety of ecosystems found throughout the world. Aquatic ecosystems include freshwater wetlands or rivers, brackish bays, salt marshes, beaches, benthic or pelagic regions of the ocean, and coral reefs. Terrestrial ecosystems include tropical forests, mountains, grasslands, and temperate forests.

The 2 ecosystems you should see are Temperate Forest and Grassland.

The grassland ecosystem you see was planted in crops for many years before Delaware Wild Lands restored it and planted it in grasses and wildflowers in 2009. Managing grasslands requires constant maintenance because natural succession occurs as seeds from nearby trees and shrubs invade the area and slowly turn it into a young forest. Woody encroachment, as it’s called, is reduced through mowing or prescribed burning. Mowing too frequently though lowers plant diversity and endangers wildlife. We also work hard to remove invasive plants which quickly crowd out native grasses and flowers.

The temperate forest ecosystem that surrounds the trail is less than 100 years old and is composed primarily of tulip poplar, Norway maple, black walnut, and black locust trees. It is heavily invaded with invasive vines and shrubs and in many places has a dense understory. Temperate forests can be dominated by coniferous or deciduous trees. Coniferous trees are evergreen and produce cones, such as pine trees and spruce trees. Deciduous trees drop their leaves every fall and new leaves emerge in the spring. These woods are filled with deciduous trees. 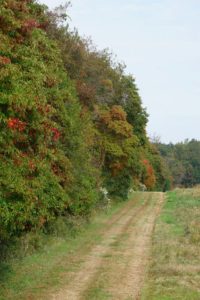 Sometimes this boundary area is preferred habitat for generalist species who do well in many different habitats. These species include raccoons, house sparrows, robins, and crows. Species who specialize in one type of habitat are more vulnerable to predation or competition from generalist species. Specialist species include meadow voles and northern harriers found primarily in grassland habitats, and downy woodpeckers and eastern box turtles found primarily in deciduous forests.